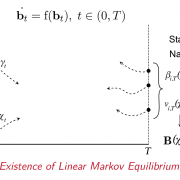 We study dynamic signaling when the informed party does not observe the signals generated by her actions. A forward-looking sender signals her type continuously over time to a myopic receiver who privately monitors her behavior; in turn, the receiver transmits his private inferences back through an imperfect public signal of his actions. Preferences are linear-quadratic and the information structure is Gaussian. We construct linear Markov equilibria using belief states up to the sender’s second-order belief. Because of the private monitoring, this state is an explicit function of the sender’s past play, leading to a novel separation effect through the second-order belief channel. Applications to models of organizations and reputation are examined. 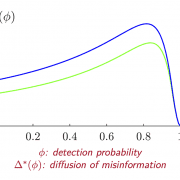 We introduce a model of a platform in which users encounter news of unknown veracity. Users vary in their propensity to share news and can learn the veracity of news at a cost. In turn, the production of fake news is both more sensitive to sharing rates and cheaper than its truthful counterpart. As in traditional markets, the prevalence of fake news is determined by a demand and a supply of misinformation. Unlike traditional markets, the exercise of market power is generally limited unless segmentation methods are employed. Combating fake news by lowering verification costs can be ineffective due to the demand for misinformation only weakly reducing, while the use of algorithms that imperfectly filter news for users can lead to more prevalence and diffusion of misinformation. Our findings highlight the important role that natural elasticity measures have for policy evaluation.

We find a sufficient condition such that a distributional upgrade on a seller’s cost distribution implies a lower expected procurement cost for a buyer. We also show that even under the strongest assumption about this upgrade made in the literature so far, the seller can be worse off, even if this upgrade is costless.